Inspired by Beecham House? Check into this Jaipur palace to soothe your withdrawal symptoms

[UPDATE: Beecham House the lavish costume drama set in Delhi was IRL filmed in Jaipur, Rajasthan. Here’s Chopstix top pick of where to stay in the Pink City.]

In the middle of negotiating the hectic roads of Jaipur our driver suddenly swings the car into a discreet driveway. We pass through a turreted “elephant gate” painted a pretty pale pink and follow the graveled route flanked by verdant gardens before pulling up outside a palace painted in the same sugary shade as the regal entranceway. Jaipur was painted pink for the visit of Prince Albert, Queen Victoria’s husband, but while the Rajasthan capital is more terracotta toned, this is a delightful, millennial pink. 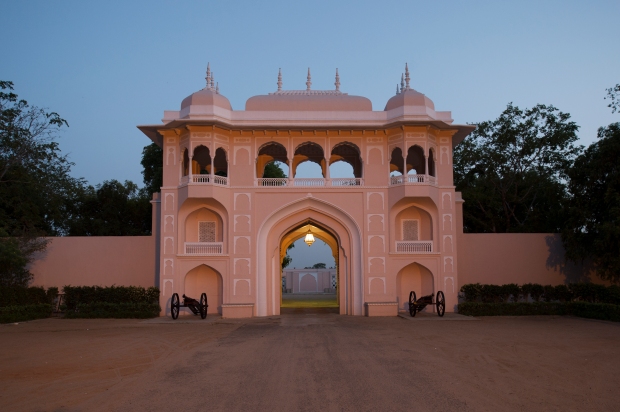 Smiling and smartly dressed men each wearing a distinctive candy coloured turban wait to welcome us. We are greeted – rather fittingly for The Pink City – with a glass of rose sparkling wine. So far, so Jaipur perhaps but inside is a complete surprise. Sujan Rajmahal Palace, now a luxury boutique hotel, may be approaching 300 years old but it has been interior decorated in a refreshingly contemporary way. Each of the public spaces is adorned with fantastically striking, custom made wallpaper from bright pinks and turquoise blues to sultry Art Deco chinoiserie and Indian inspired designs. The chandeliers, antiques and paintings remind you however that you are staying in a royal residence. As palaces go Rajmahal is on the petite side rather than a mammoth mausoleum with just 14 guest rooms – it was commissioned by Maharaja Sawai Jai Singh II for his wife. Society interior designer Adil Ahmad, recently commissioned to spruce the place up, has achieved a sumptuous cosiness that feels like a private home albeit a very grand one.

Jaipur’s royal family still own Rajmahal (it is run by Sujan the renowned company behind luxury tented camps throughout Rajasthan), the queen mother’s Thunderbird takes pride of place in the entranceway and the princess has an office in the grounds though they reside in the far larger City Palace in old Jaipur (the hotel can arrange a private tour of this palace as well as secure you a set in the royal box at the polo).

While still a royal residence, Rajmahal played host to the likes of Queen Elizabeth the second, the Prince and Princess of Wales and Jackie Kennedy as the framed black and white photographs and the names of the suites attest. Beautiful carpets gifted by another distinguished visitor, the Shah of Iran, hang on the walls as the Maharini magnanimously wanted everyone to enjoy them. The family’s love of “the sport of kings” is also reflected in The Polo Bar, lined with trophies and photographs.

Our Palace Room is reached via a stunning marble staircase and curved corridor and like all the guest rooms and suites lies discreetly behind mirrored doors which adds to the feeling of a private home. Inside our host tells me “A Maharini does not make her own coffee,” before explaining that there are no facilities for hot beverages in the room: “You ring and we will bring you coffee.”

Another special touch is that afternoon tea is served to hotel guests every day between 4pm and 6pm. You may have it wherever you wish but an especially charming spot is on the manicured lawn under a series of charming open sided tents (pink hued of course).

A pleasant surprise for the (relatively) diminutive size of the hotel is that there are three dining rooms, each more strikingly designed than the other: the grand Orient Occident is open for dinner while the cool mint Colonnade and 51 Shades of Pink (decorated as the name suggests) restaurants both serve breakfast and lunch. All offer the same menu of Indian and Western dishes, we stuck resolutely to the former which is excellent.

We also tried one of the Sujan Rajmahal Palace’s private dining experiences one evening, dining in one of the aforementioned tents on the lawn. At night the scene is enticingly lit by lanterns and makes for a very pretty venue.Once you’ve ticked off sightseeing inside the old walled city and the Amber Fort; and shopped ‘til you’ve dropped in the bazaars and boutiques, Rajmahal Palace provides a whimsical oasis. We spend our days exploring in the early mornings, after breakfasting on fresh juice and stuffed parathas, and retreating to Rajmahal in the heat of the afternoon.

The hotel has the bonus of a large, glamorous looking swimming pool surrounded by inviting sun loungers.  The designer has had fun here too with a shady terrace complete with mirrors and modern chandeliers which looks spectacular at dusk.

And a note for shopping fans: there’s a branch of the revered New Delhi based Kashmir Loom at Rajmahal so you can stock up on the best cashmere shawls without leaving the grounds.