[UPDATE: “Samsara Island”, setting for the film Crazy Rich Asian’s lavish hen weekend, was shot at the Four Seasons Langkawi in Malaysia. The interiors are currently being updated by the resort’s original designer Bill Bensley.]

Set between a white sandy beach and soaring limestone cliffs synonymous with the Malaysia archipelago, the Fours Seasons Langkawi has the luxury of never feeling crowded. Within 48 acres of luscious, landscaped grounds there are just 91 rooms.

With so much space to play with starchitect Bill Bensley has had a blast. Starting with a stunning Moorish-style series of reception spaces complete with torches and reflecting pools when you arrive. The attention to detail is impressive: everywhere you look, there’s something to swoon over.

After a refreshingly short transfer from the airport where we spot families of monkeys on the roadside, we are shown (via golf buggy) to an Upper Pavilion, one of four units in a Malaysian style wooden house. Our pavilion has a breezy wraparound terrace and a glimpse of the sea but the wow factor is the bathroom – including a huge terrazzo tub set in an alcove beneath a high domed ceiling.

For a Crazy Rich Asian experience (hopefully without the toxic friends) book a Beach Villa (pics below) or the Royal Villa in a secluded spot right on the sand – where Araminta Lee’s (played by Sonoya Mizuno) hen weekend was filmed.

The resorts’ three restaurants cover Malaysian, Italian and Western cuisine between them. All three overlook the sea but the prettiest is Ikan Ikan, housed in a traditional Malaysian wooden villa. While all the restaurants serve dinner, only Serai is open for breakfast and the Kelapa Grill open for lunch. Many guests opt for in room dining, especially if they’ve booked a beach villa.

Cleverly, families are booked into one side of the resort (close to the children’s swimming pool and kid’s club) and couples into the other – near the adult’s only pool and a delightful bar where the best spot is a swing seat overlooking the beach. 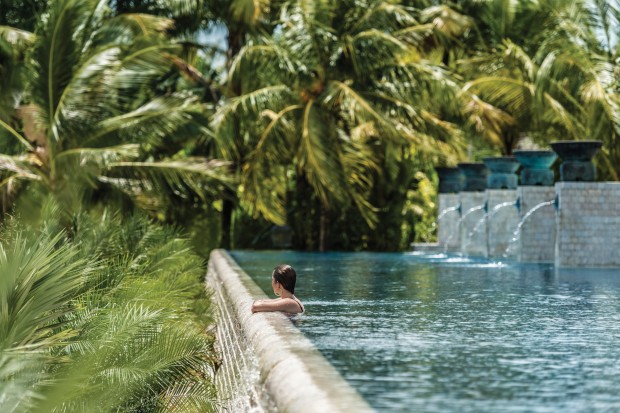 Most of our stay is spent at the adult swimming pool – a long (bigger than Olympic size) infinity pool punctuated by fountains. From our cabana we look out to the trademark verdant outcrops that jut out the Andaman sea and slink in for a dip in the pool via private steps.

A few forays are made to the superb Geo Spa which plays beautifully on Langkawi’s status as a UNESCO Geopark. From the spacious treatment pavilions, each set over water, we get a dramatic close up view of the limestone cliffs. As well as being stunningly designed, the spa offers more interesting and better executed treatments than most.

If you’re an active type, there are plenty of water and adventure sports on offer from paddle boarding to rock climbing. We’re tempted away from the resort just once, by a boat trip straight from the Four Season’s beach to the nearby mangroves. As well as the entertaining commentary of our guide, Aidi, (“Africa has the big five, we have the little five,”) our reward is the sight of kites, sea eagles and families of monkeys – the latter lining the banks of “monkey alley” and taking a cheeky look at us as we glide by.

[UPDATE: Four Seasons Langkawi has launched the Escape to Paradise promotion inspired by Crazy Rich Asians the movie. It includes a 20 percent saving on the Bed and Breakfast package, with rates starting at USD 680 onwards, daily buffet breakfast at Serai for up to two adults, and round-trip transfers between the airport and the Resort. To book call reservations on Tel: (60) 4 950 8888.]