The Romance of the Railway: On Board the Venice Simplon Orient Express

Now synonymous with luxury train travel, Agatha Christie and that infamous journey, the original Euro Night train number 469, monikered the more romantic sounding “Express d’Orient”, completed its inaugural journey from Paris bound for Constantinople (Istanbul) in October 1883. The train which Christie caught, and placed her fictional sleuth Hercule Poirot onboard, however was the Simplon Orient-Express – one of several luxury sleeper trains that cropped up as an offshoot linking the port town of Calais in northern France with Istanbul and ran through the golden age of travel in the 1920s and 30s.

The second world war and the advent of airlines meant luxury trains fell out of favour. Then an American businessman based in London, James B Sherwood, bought a few antique carriages at auction in Monte Carlo in 1977. This seemingly sparked a quest for Sherwood to seek out more vintage carriages throughout Europe. After finding them variously abandoned in sidings and people’s gardens, used as pigeon transporters and in one case a brothel, they were lovingly restored to their Art Deco splendour and launched as the Venice Simplon-Orient-Express in 1982.

You’ll be greeted aboard the the VSOE by a be-capped, white gloved personal cabin steward in blue and gold uniform who’ll take care of you for your entire trip. You’ll be shown immediately to your comfortable cabin where your luggage will already be waiting for you.

The twin cabins come with bunk beds – probably the most deluxe ones you’ve encountered with an upholstered ladder. During the day time there’s no sign of your sleeping arrangements but when you return from dinner your cabin steward will have cleverly transformed your sofa into cosy beds with crisp sheets and fine blankets. After breakfast perhaps while you’re taking a stroll the length of the train, your steward will whisk away the beds and your cabin will once again become a sitting area. In true authentic fashion, each cabin has a concealed washbasin while loos are found at the end of each carriage.

As well as the famous sleeping cars the train is made up of three dining cars, a bar car complete with grand piano and resident pianist, and a boutique. Each carriage features polished wood, beautiful marquetry, plush fabrics and antique details. One of the two cars bought by Sherwood at auction in Monaco was sleeping car 3425. It is the oldest of the sleeping cars having been built in 1926 and was marooned in a snow drift 60 miles from Istanbul for 10 days in 1929 (allegedly sparking the idea for a certain murder mystery). Two of the sleeping cars, 3543 and 3544, feature interior designs by the renowned Rene Prou. The latter was stored in Limoges, France in the Second World War where it was used as a brothel. Sleeping car 3425 was part of the train on which King Carol of Romania escaped with his mistress in 1940.

The three dining cars have equally intriguing pedigrees. Etoile du Nord, with its beautiful marquetry, once formed part of the Danube Express from Bucharest to Constanza and was later part of the inaugural run of the Rapid King Carol 1 Pullman which was a popular service in Romania along the Black Sea. L’Oriental, decorated in black lacquer, was once part of the Cote d’Azur, a train taking the bright young things from Paris to Nice. Dining car 4141, now known as Côte d’Azur, was also part of this glamorous train and later joined the Deauville Express. The carriage boasts Rene Lalique designed glass panels depicting classical figures. 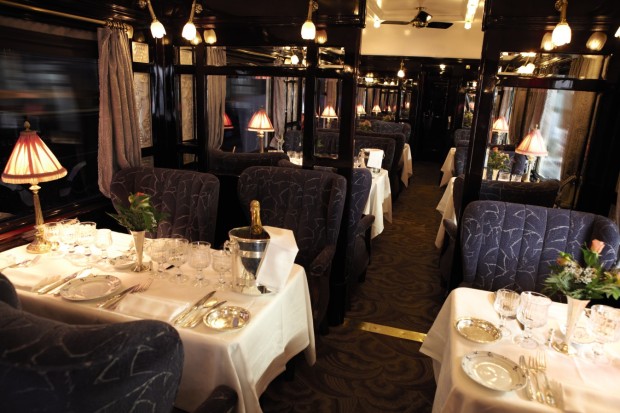 The Venice Simplon Orient Express operates on continental Europe the classic journey being the weekly overnight trips between London and Venice via Paris, through the Alps and across the Venetian lagoon; and vice versa. The two routes are slightly different, allowing for different views, as for London to Venice the train passes through the Gotthard tunnel and for Venice to London it goes through the Arlberg tunnel instead. For the ultimate indulgence, you can take the London to Venice trip as a return journey.

Each journey brings its own stunning scenery as an ever changing backdrop outside your window – we  loved seeing the Eiffel Tower lit up as we eat dinner as the train passed through Paris; and waking up to the snowy mountains of the Alps.

There are one night, two day journeys on various routes between some of the most beautiful, historical and romantic cities in Europe including the French capital of Paris, the northern Italian towns of Venice and Verona, Prague in the Czech Republic, Vienna in Austria and Budapest in Hungary. Longer, four night, five day journeys run between Venice and Paris with an overnight stay at an hotel in Budapest; and Venice to Paris with two night stays in either Prague or Vienna.

Just once a year the VSOE makes a five night journey between Paris and Istanbul, a bustling metropolis that straddles east and west. The exclusive journey follows the route of the inaugural 1883 train journey stopping in Prague, Budapest and Bucharest in Romania along the way. The train then travels from Istanbul to Venice.

Newly launched last year is the route from Paris to Berlin in Germany with its thriving arts scene and striking reunification architecture such as the Brandenburg Gate and the Berlin Wall Memorial. The journey will run just once a year as well as retracing its route from Berlin to Paris.

Pascal Deyrolle, General Manager of the VSOE, who started as a cabin steward on board, has many favourite moments on the various routes including seeing the snow in the Dolomites and Austria on the Venice to Paris journey: “It’s magical”; stopping at Varna and seeing the Black Sea on the Paris to Istanbul journey and crossing the border from Bulgaria to Turkey when all passengers alight at passport control: “It’s a social element on the platform. It’s absolutely my favourite aspect of the trip.” As well as absorbing the magnificent scenery of the Rhine River Gorge on the Paris to Berlin journey. In fact the new Paris to Berlin route launched this year, taking in the Rhine River Gorge, was one of his personal wishes.

Though he finds it difficult to choose Pascal’s favourite journey of all the routes is Venice to London. The train departs Venice Santa Lucia station at 11am, crossing the Venetian lagoon then travelling at a leisurely pace throughout the day through the Dolomites, Austria and Switzerland. The next morning after breakfast the train stops at Paris with a chance for passengers to stretch their legs on the platform before continuing to Calais. The journey to or from London, on this and all the routes, is completed through the Euro tunnel and the Belmond British Pullman train once in Britain. Contrary to popular belief the VSOE is embarked or disembarked at the ferry port of Calais in northern France, it does not travel to the UK.

“For most guests it’s a once in a lifetime experience so the atmosphere on board is one of celebration,” says Pascal. While the Venice journeys have a feel of celebration the journey to Istanbul is about adventure. The six day journey from Paris Gare de l’Est station follows in the footsteps of the original train route in 1883. As the VSOE journeys towards the edge of Europe passengers stop for overnight stays at hotels in Budapest in Hungary and Bucharest in Romania with the rest of the nights spent onboard.

After crossing the Danube from Romania into Bulgaria the train arrives in Varna, a beach resort town with a surprisingly grand station building with a wonderful Art Nouveau roof. You’ll spot the Black Sea and then smell the scent of the ocean in the air when you disembark, just as the original passengers experienced. On the early routes, passengers would disembark at Varna and cross the Black Sea by ferry before picking up another train.

Crossing the border from Bulgaria to Turkey is also an experience as the train stops and all the passengers alight to have their passports stamped in person at the customs booth. Pascal admits to being worried about how passengers would react but has found that they think it’s fun and enjoy chatting to their fellow passengers on the platform as well as the passersby who gather to look at the handsome train.

A new route is added every few years the most recent being Paris to Berlin launched just this year. After the train passes from France into Germany there is a stretch between Bingen and Koblenz where there is a magnificent view of castles for over an hour. The trick was to get all the timings right: departing and arriving at a convenient time plus travelling through the Rhine at a time of day that allowed the best view of the scenery. This year there are plans to route the train slightly differently in order to arrive through East Berlin where you’ll see all the main monuments.

All meals on board are inclusive with breakfast and afternoon tea served in your cabin and lunch and dinner in the dining car. There are two seatings for lunch and dinner and passengers linger in the bar car before or afterwards. Guests are encouraged to dress up onboard and dinner is particularly fun with everyone in glitzy frocks and Black Tie.

Most of the produce is procured in Paris or the starting destination with the rest picked up along the route. By the time the train arrives at the final destination the supplies are empty and the team load up there again for the return journey. Executive Chef, Christian Bodiguel, has always been very particular about suppliers and the quality of produce whether it’s seafood, meat or vegetables. The team always buy raw, whole fish from specific fishermen and now they only buy sustainable seafood. 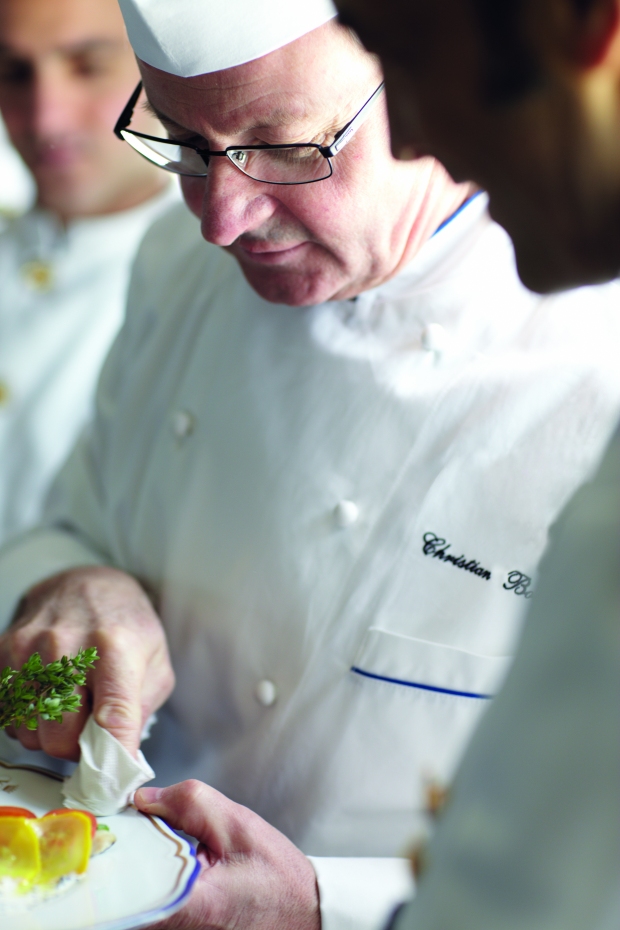 The Bar Car, which doesn’t close until the last guest has gone to bed, was refurbished with new interiors of rich blues and golds last year and renamed 3674 after its original carriage name – it was built in 1931 and ran as part of the Sud Express in France.

Adding even more glamour to the train,  a Champagne Bar has been created within one of the dining cars. Cote D’Azur which is decorated with glass by Rene Lalique has always been Pascal’s favourite dining car so when the idea of a Champagne Bar was mooted, he felt it was natural to partner with Lalique and add the Champagne Bar as a section within that carriage.

On top of recycling wherever possible, quite a challenge onboard a train, VSOE supports various charities and aims to protect small producers. It has recently started to support orange groves in Sicily. The team takes a collection once a year from crew members and whatever is collected is matched by the company. The money goes to buying more orange trees in Sicily. As there are not enough oranges grown to supply the whole train they are used for orange juice in the bar – something to remember when you’re ordering a Bucks Fizz.