The best champagne for a sparkling Christmas

Some 30 metres beneath the streets of Reims lies a labyrinth of chalk cellars housing millions of bottles of champagne. These ‘crayeres’ – limestone mines originally dug in the 4th century purely for materials – form a natural habitat for storing the French fizz. The caves’ temperature, humidity and tranquility are perfect for holding the bottles while the wine undergoes the secondary fermentation that will turn it into champagne.

Piper-Heidsieck, the champagne house that landed on the map when founder Florens-Louis Heidsieck presented his wine to Queen Marie-Antoinette, owns 47 of these chalk pits. Unlike some of the neighbouring champagne houses that own chalk cellars, Heidsieck is not open to the public, so the crayeres have a gentle, ethereal quality, enhanced by the ‘cathedral’ style in which the caves have been dug out.

Every corner turned reveals another enticing stack of bottles and magnums. At any one time there are 20 million vessels of champagne stored here. Since 1994 Piper-Heidsieck has been steered by the award winning wine maker Régis Camus. His latest accolade is this year winning the renowned International Wine Challenge’s Wine Maker of the Year – for the eighth year running. The IWC also awarded Piper-Heidsieck Rare Vintage 1998, the first Rare Vintage that Camus shaped, Sparkling Wine of the Year for the second year running.

While the legal minimum period for second fermentation is 15 months, Piper-Heidsieck bottles are stored in the crayeres for at least 24 months. Wine maker Regis Camus believes this allows the fruit and body of the pinot noir to fully develop in the blend.

The Piper-Heidsieck’s winery, a paean to gleaming stainless steel a few minutes outside Reims, is where the blends are created. Shiny vats contains the grapes harvested from one of 200 villages in Champagne that supply the Heidsieck house. Each village grows either pinot noir, pinot meunier or chardonnay grapes, the three varieties – two red, one white – that go into making champagne. Camus explains, “When we build the blend, pinot noir will be the structure, pinot meunier will be the cement and chardonnay the decoration.”

He and his team taste between 20 and 30 of these still wines every day. He can tell which wine is destined to be a ‘Piper’ and which has the potential to make a vintage. And he is not making the decision based on how the wine tastes that day, but how he predicts it will taste in the future. “It’s like a teacher taking care of four-year-olds. After a few weeks you have an idea of who is going to be creative, who will be good at maths…” he laughs. Although he does concede when pressed, “It’s the heart of the job and the most difficult skill to pass on to someone else.” 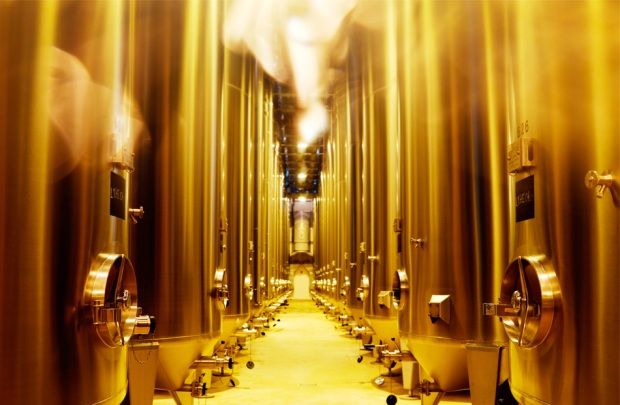 Unusually, and driven by Camus, Heidsieck places a big focus on its regular brut rather than the star attraction vintages. “In my view a champagne house should be judged on the style and consistency of its non vintage,” Camus says. “It is quite easy to produce a good vintage with superb wines, but much more difficult to produce a consistent style in each bottle of non vintage every year.”

Especially tricky when dealing with the nerve-testing wine-growing conditions of the Champagne region. With weather that can involve frost, relentless rain or scorching sun – all of which can ruin the grape crop – having a good year is in the lap of the gods.

“People in Champagne pray to St Vincent – patron saint of winegrowers!” smiles Camus. To pre-empt poor harvests, champagne houses need to keep a good amount of wine from their best years. “When you have a lean year you need to beef the wines up. The only way to do that is to use reserve wines,” says Régis. “We have a very large and rich collection of reserve wines which enables us to feel calm in meagre years.”

As for drinking Piper, Camus has one final tip. “We often forget that champagne is a wine,” he says. “When we’re at a party, we hear the pop of a cork and we run to the bar, grab a glass and pour it down. But first one should look at a wine, then smell it and then taste it.” Sante!

[Piper-Heidsieck non vintage has been voted best champagne in a blind tasting by Which? in November 2016. A version of this piece was originally published in 2014]