Looking for a London Bolthole?

What’s the story behind it?
Not just a glitzy address, 45 Park Lane is the newly opened younger, cooler sibling of The Dorchester hotel. Based next door to the grande dame, it’s more of a boutique affair with just 45 rooms and one restaurant (headed by a celebrity chef) packaged in a more modern design than The Dorch.

What is the design concept?
A homage to Art Deco glamour. Right from the eye-catching entrance, clad in curved metal, and the lobby dominated by a striking, over sized light fitting. A theatrically illuminated staircase leads enticingly to a mezzanine level bar. The furniture throughout is all rounded, glossy black lacquer and gleaming chrome. You’ll feel as though you’ve walked on to a lavish Hollywood set. 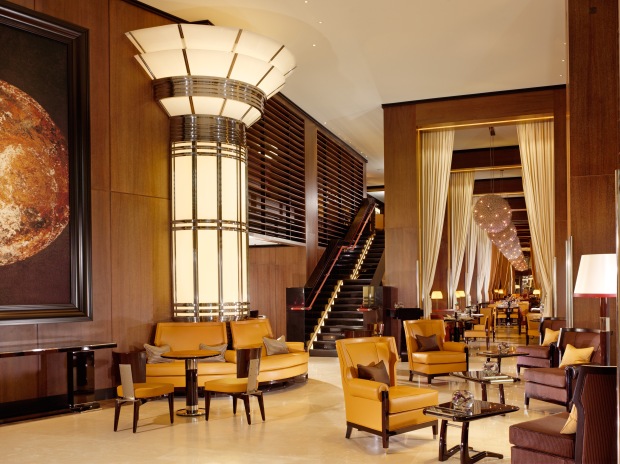 The lobby at 45 Park Lane

Who’s checking in?
Mainly film industry types (there’s a dinky Media Room for screenings) and fashionistas – a large gaggle were in situ for London Fashion Week. Brad and Angelina* have also spent the night, you can’t get more A list than that.

What are the rooms like?
Bigger than average for central London – apparently the standard size rooms are the largest in Mayfair at 35 sq m. Cleverly, all of them overlook Hyde Park while the penthouse has a panoramic view of London and a wraparound terrace to enjoy it from.
Despite the Thirties feel, this is no museum piece – in fact it’s gadget heaven. A vast Bang & Olufsen television is “the latest on the market”, according to my “host” (there are no stuffy “butlers” here). He also points me towards touch pad screens at every turn which control just about everything in the room. There are light settings galore – five alone for the bathroom.

What are the bathrooms like?
Also impressively large and furnished in luxurious marble. There is a “bath menu” from which to choose jet lag or relaxation potions at £20 a pop and the bathroom is otherwise well stocked with generous sized bottles of Aromatherapy Associates goodies. Displaying yet more gadgetry, a television manifests within the mirror above the double basins but I was more impressed by the inclusion of a full length looking glass – often strangely absent in hotels rooms.

What about the food?
The hotel is home to US chef Wolfgang Puck’s only European outpost, Cut. Red leather banquettes and mirrored tables continue the Deco theme in the restaurant. The menu is modern American with takes on blue cheese salad and crab and lobster cocktail to start and a strong leaning towards steak.

Choose between beef reared in America, Australia or England and cuts ranging from buttery soft sirloin and earthy ribeye to a substantial porterhouse for sharing between two. Several sauces including classic Bernaise and a Chimichuri, accompany them as well as “adds” for the more ambitious of appeitite: seared fois gras, Stilton and bone marrow. Sides are a main attraction in themselves: macaroni and Cheddar cheese, tempura onion rings, creamed spinach… If you have room, and it’s a big ask, there’s banana whipped cream for dessert.

Starters range from £9 to £17 while steaks start at £29 for a ribeye and reach £85 for a 6 oz wagyu filet mignon. But then this is Park Lane, no one is baulking at the bill.

What about keeping fit while I’m there?
There’s no gym or spa but guests are free to use the facilities at The Dorchester plus in room massages are offered. A yoga mat in every room is a nice touch. If you prefer your wellbeing outdoors, maps of jogging trails in Hyde Park and the hotel’s own Brompton bicycles in signature purple are provided. So much more civilised than a gym.

Anything else I should know?
Unusually for a star named restaurant, Cut’s kitchen is also responsible for in room dining and breakfast service. Guests are all the luckier for it.

*This story was originally posted in 2011