Some thoughts on the first Singapore Michelin Guide

The Michelin Star winners in Singapore

Before the inaugural Michelin Guide Singapore was launched on July 21st I was sure of two things: that at least one hawker stall would gain a star and that Joel Robuchon would be awarded three. The former because I could see the headlines about “the world’s cheapest Michelin starred restaurant” pinging around the world (and so could Michelin, I’ll wager) and the latter because Robuchon tends to collect three Michelin stars around the globe as naturally as breathing.

And so, as you’ve probably heard, Hill Street Tai Hwa Pork Noodle and Hong Kong Soya Sauce Chicken Rice & Noodle became the proud recipients of a Michelin star apiece while Joel Robuchon clocked up another three stars for his fine dining establishment in Singapore (read on for the full list). All announced, in a world first for Michelin, to much fanfare: a songstress in glitter crooning When You Wish Upon a Star and dancers in chefs uniforms waving giant forks and spoons. Even the three star reveal had some drama: director Michael Ellis teased us at first that not every location was worthy of three Michelin stars before announcing he did indeed have a red envelope and that it was not empty.

The departure of Asia’s 50 Best Restaurants had left a restaurant awards ceremony shaped hole in Singapore. Asia’s 50 Best, an industry only event, debuted in Singapore three years ago and left for Bangkok this year amid rumours that the Singapore Tourism Board was cutting its funding.

Enter the Michelin Guide Singapore and its Gala Dinner Awards Ceremony – a new approach for the tyre company come publisher who usually simply announce the list at a press conference.  The event was part sponsored by the Singapore Tourism Board, who flew in media from around the world, and open to anyone who could pay SG$400 for a ticket. Much has been made of the price but Singapore is a city that flourishes on expensive “exclusive” events and the price is equal to what you’d expect to pay for dinner at many of the Michelin starred restaurants. Naturally there was no San Pellegrino or Acqua Panna in sight, the “official water partners” being Evian and Badoit.

Joel Robuchon – the only three Michelin stars in Singapore

The food at the dinner was flagged up as by Joel Robuchon, owner of two restaurants at RW Sentosa, the “title partner” in whose convention space the Michelin awards were held. Robuchon, it was announced later that evening, was the recipient of two Michelin stars for L’atelier de Joel Robuchon and the coveted three for Joel Robuchon Restaurant – the only three star Michelin winner in Singapore.

Two of the other restaurants openly given credit for catering the event – Forest and Osia – are also tenants of RW Sentosa. They both received one Michelin star.

I can only imagine how Marina Bay Sands, the rival casino and celebrity restaurant joint across town, are spitting (roulette) chips. They clocked up just two stars (as opposed to RW Sentosa’s total of seven) for Wolfgang Puck’s Cut and Waku Ghin by Tetsuya Wakuda – two highly acclaimed restaurants.

On the other hand, it’s hard to imagine that whatever the talents of a hawker stall chef they could be on a par with these two establishments and many others on the one star list including Shinji by Kanesaka, Jaan and The Kitchen at Bacchanalia. And there were many on the bulging one star list that were equal to two. There were also some puzzling omissions. Where was the Tippling Club? Wild Rocket? Gunther’s? Saint Pierre? I could go on. 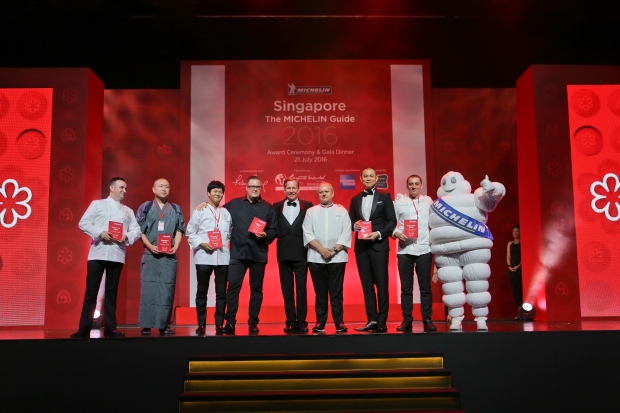 I have eaten at Joel Robuchon in Singapore and while the food was undoubtedly excellent there were a few snags. Two of the dishes that were brought to the table were not the ones I ordered and our waiter had no idea that there were wine pairings available – as written clearly on the menu. It’s not what I would describe as a three star experience however Michelin states: “The service levels have no bearing on the award.” That surprises me as I would have thought it’s a vital component of a restaurant “worth a special journey”. If anyone has an old copy of a European based Michelin Guide I’d love to know if includes the same criteria.

The Kitchen at Bacchanalia

The Song of India