The Best of East Meets West

When the team behind Meat Liquor, the food truck turned gourmet burger chain, opened their first outlet outside the UK in Asia earlier this summer they knew their signature, Dead Hippie, would be on the menu. But alongside the various burgers for which they’ve become known they also introduced new dishes not seen in their UK eateries.

Shambal Wings, chicken wings glazed in house sambal sauce, is a dish inspired by the cuisine in Meat Liquor’s new locale, Singapore. Sambal, made from a base of chillis and variously shrimp paste, fish sauce, garlic, ginger, spring onions and vinegar (depending on the region and the cook) is a staple condiment across South East Asia.

“It’s a homage to sambal, it’s our take on it,” emphasises co founder Yianni Papoutsis regarding the “shambal” name. The sambal also tops French fries (along with a fried egg and crispy onions) at Meat Liquor and there’s a Gun Powder Crab on the menu “a soft shelled crab steamed with chilli – inspired by Singapore Chilli Crab.” In another twist, Papoutsis and his partner Scott Collins have put the sambal wings and fries on the menu of their Covent Garden, London outlet.

Meat Liquor is the latest Western restaurant to localise their menu in Asia. The Pawn in Hong Kong, revamped last year with British chef Tom Aikens brought in to consult, touts a British/Western menu but includes a number of Asian influenced dishes.

“Because I wanted to bring what I’m doing in the UK to Hong Kong, I really tried to stick to my cooking philosophy and recreate some of my classics here. Having said that, with different palates and with Hong Kong being such a vibrant culinary region, I have started experimenting with Asian ingredients which I use in some of the more refined dishes on the menu,” says Aikens.

“Whenever I’m in Hong Kong, I try and eat locally as much as possible, exploring new flavours which I then take back with me for inspiration. That’s the great thing with coming to work in different countries as it opens up a whole new scope of ingredients and cooking methods.” 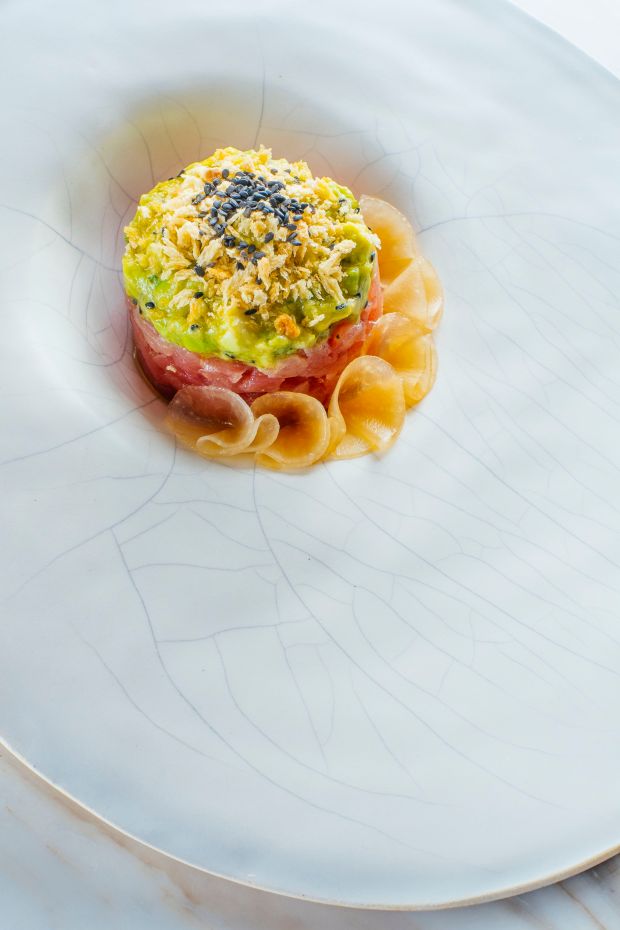 Soy and sesame tuna tartare at The Pawn, Hong Kong

One example is Soy Marinated Tuna Tartare, “That was really about using lots of different Asian flavours and tastes that work well together, like sesame and soy,” says Aikens.

Among the modern European dishes for which Jason Atherton’s Aberdeen Street Social is known is a “Peking Duck” Salad on the Bar & Bistro menu. Executive chef Chris Whitmore says: “We were looking to expand the salad selection on our all-day menu. Knowing that duck is popular in Hong Kong we thought it would make a nice addition as a starter or sharing dish. It’s now one of our most popular items that guests often come back for.”

At Catalunya head chef Josep Casas says the Asian influences are deep rooted in his country’s cooking. “Oriental flavours have influenced Catalan cuisine for many centuries. A number of the signature ingredients used in Spanish dishes come from Asia. With our tapas, we try to emphasise the flavour, ingredients and techniques from both worlds.”

These include Sweet & Sour Pork Ribs. “We bring the ribs from Spain and combine with a quince paste, cooking them for 8 hours at a low temperature, creating a sweet and sour flavour. With this dish we tried to bring a signature ingredient of Spain and adapt it to the Hong Kong taste.”

A new addition this autumn is Scallop Empanadilla in Black Garlic Cream which resembles a Chinese dumpling. “The concept of the empanadilla is used in many cuisines all over the world, we combine it with Asian ingredients like black garlic which balances the flavour and helps to emphasise the taste of the foie gras and scallops from Europe. For the presentation, we took inspiration from Chinese dim sum.”

When Sean Mell joined Nobu at the InterContinental in March as Executive Chef he devised dishes exclusively for Hong Kong. Including the Foie Gras Bao with Pickled Cherries. “The dish was inspired by the pork Cha Siu Bao. It’s meant to mimic the flavour and texture of the original dish, but recreated my way,” says Mell.

“With the Cha Siu Bao, you have the rich pork that’s cooked with hoisin and oyster sauce then you have the soft bread. For the Foie Gras Bao I use the rich flavour of foie gras combined with a sweet onion soy sauce with the soft toasted bao. I add the pickled cherries and sakura relish to cut through the richness of the foie gras and to rejuvenate the palate.”

Pierre Gagniere is known for combining East and West ingredients at his restaurants in the region. This autumn Pierre at the Mandarin Oriental features a Salt Cod Brandade on the tasting menu devised by Gagniere himself when he visited Hong Kong in June. The classic French dish will include sliced abalone, a delicacy and Chinese favourite, added for the texture as well as the added sea taste.

At the other end of the spectrum, the fast food sector has long been localising its menus. KFC was the first to recognize the importance of adapting to tastes in Asia, serving bowls of fish ball soup and congee alongside buckets of fried chicken in its China outlets.

McDonald’s followed suit (as part of a global localisation) introducing the likes of Teriyaki and Chicken Katsu burgers in Japan, Bubur Ayam McD (chicken strips in rice porridge) in Malaysia and McSatay burgers in Indonesia. McRice – using rice cakes instead of buns – are popular in Taiwan, Singapore and Indonesia. McDonald’s in India don’t serve beef or pork but instead have the Maharaja Mac with chicken and have upped their vegetarian options including McAloo Tikki and McSpicy Panneer wraps. During Chinese New Year, the Prosperity Burger (two patties in a black pepper sauce) is a familiar sight at McDonald’s in China and Hong Kong.

Latest additions at KFC include Umadare (a “Japanese inspired: tangy yet savoury sauce”) and Yeng Yem (“Korean – sweet and spicy”) wings served in a bento box with a mound of rice in Singapore and Maska Merah rice wraps in Malaysia.

Chefs in Hong Kong say that their creations not only just adhere to local tastes but are driven by the sheer competitiveness of the dining scene here. Says Nobu’s Sean Mell: “Hong Kong is a city that will push you to do more. I feel like you always have to create something that will intrigue the customers to come in, and even more so to keep them coming back.”