A tantalising time at the Capella

Before I left London I had become mildly obsessed with fake tan. A new generation of self tanning treatments that promised non-orangey, non-streaky results coupled with a new awareness of the damage sunbathing can do to the skin meant that most women I knew were hitting the (fake tan) bottle.

When I moved to Asia, it became evident that looking suntanned wasn’t so big among the Hong Kongers or Singaporeans in fact it was positively spurned. Slowly I began to embrace having pale skin too. Recently though, following a trip back to London where everyone looked so golden limbed, I’ve been hankering after a tan again. And with the super strength of the rays here in Singapore a self tan seemed the way to go.

Healthier still is the idea of a self tan from The Organic Pharmacy which rather than using chemicals is based on a 100 per cent natural ingredient derived from sugar beet. Auriga at the Capella hotel on Sentosa, which offers The Organic Pharmacy treatments and products, is one of my favourite spas in Singapore so I was pleased to see they’ve introduced the self tan. (Tip: If you do book a session here be sure to go a good half hour early so you can enjoy the heat and water rooms.)

Entrance to the Auriga Spa at the Capella

My friendly therapist explained the process to me – no oils on the skin beforehand, no showers afterwards for eight hours. As such she removed my make up with a non-oil based cleanser. She then used expert, massage strokes to first apply an exfoliator (green coffee which as well as sloughing off deadline skin tackles cellulite – bonus!). After a shower, the self tan cream was similarly expertly applied. I was asked how deep I wanted the tan to which I replied fairly light but you can go as dark as you like.

After a few minutes I noticed something: there was no strange chemical smell you normally associate with self tan lotions. Instead the aroma was more like an exotic massage oil. Better still, the cream took only one minute to dry and there was no feeling of stickiness or greasiness (I bug bear of mine). 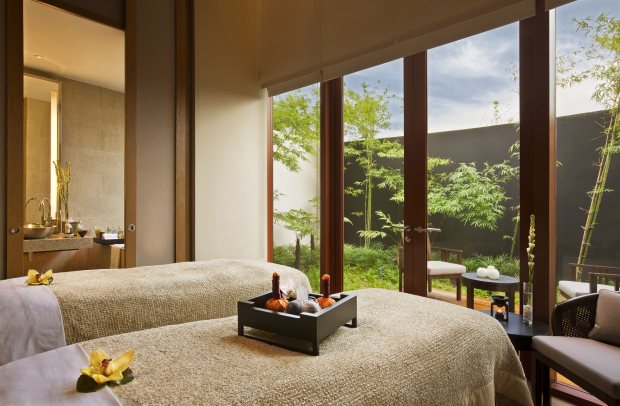 I was told the tan would develop in three hours but after one I could already see a healthy glow. The next morning I woke with a lovely golden tan. If I’m being picky, it was a bit patchy around the soles of the feet but not that anyone would notice and had a faint “self tan” smell but that disappeared the next day.

I was happy with the “natural” honey shade, not too dark for my colouring, just as I’d asked for. The therapist told me the tan should last for a week, starting to fade after three days. I’m on day four and that seems spot on. I’m not sure my diary or my bank balance would allow me to go every week for a top up (you can also buy a bottle to apply at home) but I would definitely return before a party or holiday.