Stars and Spas in Macau

Something is stirring in Macau, the sleepy colonial backwater turned gaming mecca on the southern tip of the China mainland just a 40 minute ferry ride from Hong Kong. For amongst the glitz (and sometimes seediness) of the mammoth casinos and five star hotel complexes are some of the best restaurants and spas in the world. 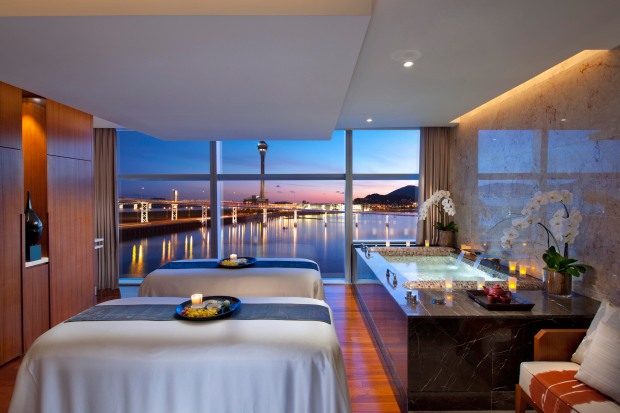 Spa at the Mandarin Oriental Macau

While Macau, as a former Portuguese colony, offers any number of rustic bistros that Portugal can be proud of, it’s the fine dining that’s attracting attention.

Joel Robuchon has a new outpost there in the colourful Grand Lisboa hotel on the Macau peninsula. Newly unveiled as Robuchon au Dome – replacing Robuchon a Galera – the restaurant has just moved to an even flashier spot under the glass atrium at the top of the sky scraper hotel. With its Swarovski chandelier, Steinway piano and Baccarat crystal the place is almost a pastiche of a three Michelin starred restaurant (an honour it has secured four years running) but purists won’t be disappointed with the cooking. Under chef Francky Semblat [UPDATE: Chef Francky Semblat has been succeeded at Robuchon au Dome by Julien Tongourian] the bread and butter trollies and signature dishes such as caviar jelly with cauliflower cream all prevail. As well as new, Asian inspired creations.

Oriental jelly with spices and caramel

In Las Vegas – which Macau is often deemed an Asian version of – Robuchon sits alongside Thomas Keller and Nobu. Perhaps they will follow him to Macau but for now it’s the Chinese cuisine that really shines. Zin Yat Heen is one of a number of Cantonese restaurants with a deservingly high reputation. Tucked away within the Four Seasons on the Cotai Strip, a main drag for gaming and shopping, the two Michelin starred Zin Yat Heen is a tranquil haven away from the bling with laquered wall coverings and paper lanterns and a prominently displayed wine selection rather than the garish or downright dull décor that often comes with Cantonese dining rooms.

Chef Ho Pui Yung, originally from Hong Kong the heartland of Cantonese, specialises in seafood and the freshest of top quality ingredients for his exemplary cuisine. Diners flock here for the crab claw stuffed with shrimp and the crispy chicken in particular.

And there are other contenders gaining credence. Over at the Wynn hotel back on the peninsula, fellow Cantonese restaurant Wing Lei has been elevated to two Michelin stars this year. Next door, Golden Flower at the Encore hotel has received its first star. What differentiates the Golden Flower is its emphasis on the elite Tan cuisine; created in Beijing and defined by detailed preparation and subtle flavours.

Chef Liu Guo Zhu who moved from Beijing to Macau bringing seven apprentices with him says, “Tan cuisine is an exclusive school of cooking and hard to understand because of the labour intensive cooking methods involved.” In reality, that means dishes such as stewed fish maw in a rich chicken broth.

Tim’s Kitchen is another of the more interesting Michelin starred venues. Originally a private chef for HSBC executives, Tim Lai’s cooking is a sophisticated and contemporary take on Cantonese. Dishes such as simmered pomelo peel and goose meat roll practically have their own fan club.

While the Hong Kong branch is a chi chi affair in trendy Sheung Wan, Tim’s Kitchen Macau is found incongruously inside the Hotel Lisboa in the heart of the peninsula’s gaming area.

It’s no surprise that these fine dining establishments are housed within the casinos and hotels. Where the high rollers flock, it follows that high class restaurants will open. Though whether the gamblers are really interested in what they are eating is another matter. It’s not unheard of to see groups of women dining together while presumably their husbands are at tables of the gaming variety. At the Mandarin Oriental I saw a group of wives enjoying cocktails in the bar while at the hotel’s spa I saw a succession of well groomed young men. For spas are another draw for Macau – not just for WAGs but increasingly metrosexual mainland men (China is said to be the only country where men outspend women on beauty). As such the standards need to be high-roller high and many have scooped up awards.

Whoever the customers are, and whatever their tastes, their presence will continue to feed the trend for more high quality restaurant openings. The latest, Guincho a Galera, is the first foreign foray for a Portuguese Michelin starred restaurant. So perhaps Portugal will be landing on the map in Macau again very soon.

The Mandarin Oriental – mercifully free of bling, boutique sized and without a casino attached. The compact spa is in keeping with the intimate size of the hotel and makes much of its view of the peninsula. Voted best spa for men but definitely will appeal to women too.

One of the largest spas in Macau, it has a botanical theme so really feels like an urban oasis in the middle of the mall madness. Large choice of treatments.

Emphasis is on exclusivity with eight private treatment rooms featuring their own steam, sauna and hydrotherapy as well as dressing room.

Incongruously located within the gargantuan Galaxy complex but including a massive spa. The Banyan Trees reputation for spas is huge and this one is no exception.