Is this the best restaurant in Hong Kong?

[UPDATE: Amber is now number 24 on The World’s 50 Best Restaurants list 2017 and remains the only restaurant in Hong Kong to be recognised on the list.]

This month the iconic 50 Best Restaurants in the World awards roll around again. Last year, a Dutch born, French trained chef working in Hong Kong achieved something no one else in China has managed for six years – an entry on the coveted list.

Richard Ekkebus joined Amber at The Landmark Oriental hotel as executive chef when it opened in 2005. Since then he has racked up the accolades earning two Michelin stars, four years in a row, and in 2011 placing Amber on the 50 Best list.

His fellow chefs – and loyal customers – have been magnanimous in their support. “I received 850 emails of congratulations and well wishes,’ says the personable Ekkebus. “I wanted to respond to them all so I tried to reply to 40 a day.”

And although thrilled about his achievement Ekkebus is quick to point out the wealth of culinary talent in his adopted city. “We have a lot of great chefs in Hong Kong. And there are a lot of French, Michelin starred restaurants: Gagniere, Robuchon, Ducasse… all the big names are here.”

He is equally keen to highlight the hard work of his colleagues at the restaurant and hotel. But his own talent is undisputed; creating exquisite dishes such as morels painstakingly stuffed with minced chicken and served with what looks like cannelloni but is on closer inspection tightly wound strands of spaghetti.

“I come from a fine dining background and the restaurant has all the traditions and attention to detail that go with that but it also has the spirit of Hong Kong,” says Ekkebus. The location is also reflected in the menu which uses not only the best of French but worldwide ingredients. 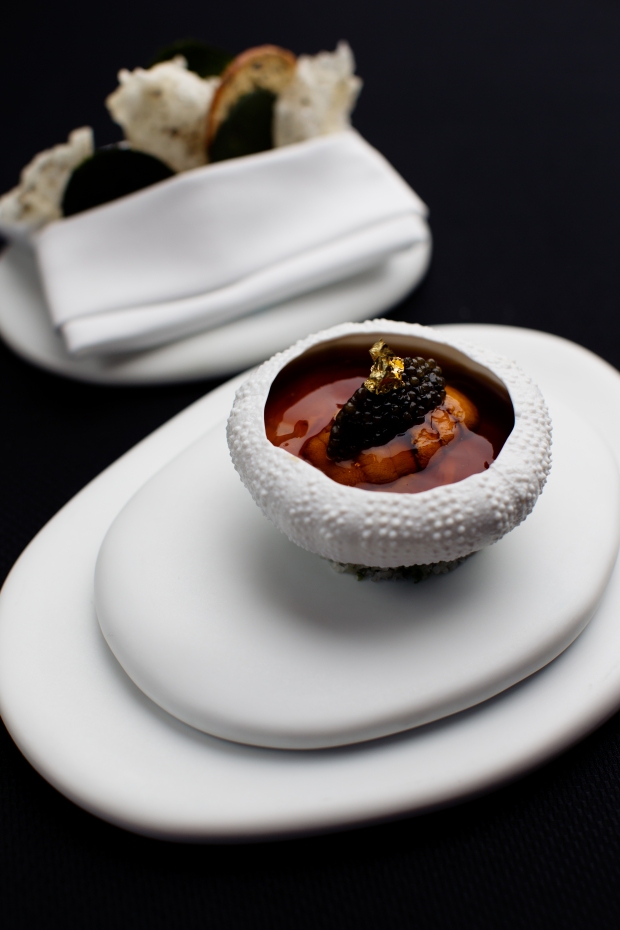 “The advantage of being in Hong Kong is that it’s at the crossroads of everything – Europe to the west, Japan in the east, Australia and New Zealand in the south – all with exceptional ingredients.” That makes ingredients like guinea fowl from France, pork from Iberia, sea urchins from Japan and salmon from Tasmania possible. And conscious of carbon footprint Richard has forged relationships with several farmers in the New Territories of Hong Kong to grow vegetables for the restaurant.

Amber’s clientele is mostly Chinese and as such the biggest challenge for Ekkebus was adapting to the local tastes. “They definitely have a different palate to westerners and I had to make a few adjustments to my cooking. For example they don’t like the taste of salt so I had to keep toning that down. It was quite frustrating at first.”

Off-duty, Ekkebus likes to eat Asian food but says his favourite restaurant is home. “My wife is a fantastic cook.” Does he feel under pressure now to achieve a third Michelin star? “Ambition yes, pressure no,” he says calmly. “It needs to organic. I am not like those chefs who think ‘I must have three Michelin stars!’ The awards are very nice, and all good for business, but ultimately it’s about happy guests. If people keep coming back to eat at your restaurant, you’re doing a good job. A restaurant is a work in progress, even if everyone says it’s wonderful, I’m thinking, ‘what’s next?'”